One of the projects the Austrian National library is participating in is the Europeana Sounds project, which goal it is to make more sound recordings and audio related content openly available. Within this project the Austrian National Library provides access to autographs from our music department of composers from the 17th to 19th century. They derive mainly from two collections: the so-called Safe Collection and the Bedroom Library (“bibliotheca cubicularisʺ) of Leopold I.

One of the most noteworthy “sub-collections” within the Safe Collection is certainly the one about Hugo Wolf. It comprises his biggest works as well as numerous letters, which give an insight into the compositional process, his inspirations and his life. 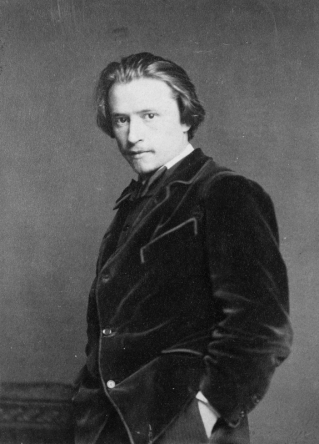 Hugo Wolf was an Austrian composer and born on the 13th of March in 1860 and died in 1903. He lived in a time full of bombastic compositions, where the size and the scope of orchestras became grander and the ambitions of composers lay in filling concert halls and opera houses. In contrast to these music surroundings, he was especially known for his small scale compositions – he would only need a piano and a voice to put feelings into motion and to let a story become real. And the genre he scintillated in was the Lied (song). He is considered as one of the most important composers of song since Franz Schubert and Robert Schumann. But the song was not the only genre he was operating in, his ambition were mainly bigger compositions. 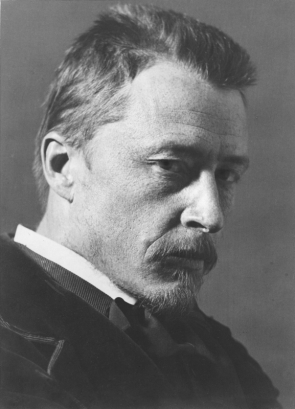 He was a big fan and supporter of Wagner and Liszt. His aesthetics matched those of the New German School, who saw the creation of Musikdrama (musical drama) and Symphonische Dichtung (symphonic poem) as the centre of compositional effort. He was not happy at all with only being known for his smaller scaled compositions and with people expecting him to write something grander. But all his efforts concerning bigger compositions were not very successful. In 1891 he wrote crestfallen in a letter: “Die Oper und immer wieder die Oper! Wahrlich, mir graut schon vor meinen Liedern” (“The opera and always the opera! Really, I am now almost dreading my songs.”)

Hugo Wolf wrote the main part of his work between 1888 and 1897. Concerning his songs you can divide his creative activity into two phases: First there are his early songs, which he composed before 1888 and secondly, there are the mature songs, which followed after.

In his early songs you can make out that he is taking the traditional path, which connects him to Schubert and Schumann. Especially the latter he considered as a role model. He favoured putting to music the same poets as Schumann (for example Heinrich Heine) and sometimes ended up copying his style. On one manuscript, which he did not finish, he even wrote “Zu viel Schumannisch; deshalb nicht vollendet” (“Too much like Schumann; therefore not finished”)

Beginning of „Das ist ein Brausen und Heulen“ (This is a roaring and howling). One might be reminded of Robert Schumanns “Lust der Sturmnacht” (“The pleasure of a stormy night”). Lyrics: Heinrich Heine, (Mus.Hs.14 Mus) – Austrian National Library – Public Domain

His mature songs can be regarded as the epitome of his work. There you can see how he equally considered and treated the three components: text, piano and voice and how he managed to draw a relation between them on a deeper Level.

The main part of his mature songs was written between 1888 and 1891. There are 5 major song-cycles he created within this time: Songs by Eduard Mörike, Johann Wolfgang von Goethe and Joseph von Eichendorff as well as the Italian songbook by Paul Heyse and the Spanish songbook by Paul Heyse und Emanuel Geibel, which all together consist of 214 Songs.

Eduard Mörike (1804-1875) could be considered one of Hugo Wolf’s favourite poets for a long time. His Mörike Song-Collection contains 53 songs. Although Mörike’s texts were per se not unpopular to be put to music in the 19th century, none of the famous composers (such as Robert Schumann, Johannes Brahms, etc.) used many of his poems or devoted himself as much to Mörike’s texts as Hugo Wolf. And nobody seemed to understand Mörike as well as Wolf did. 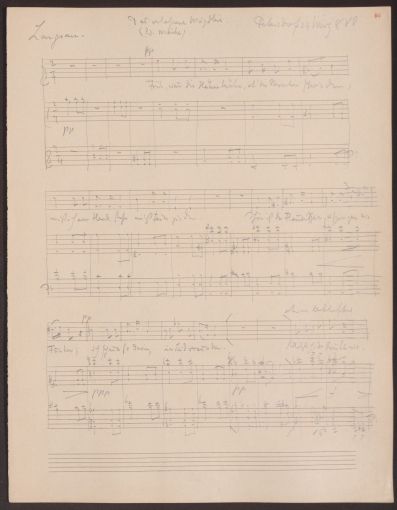 Wolf loved the variety of topics in Mörike’s poems. They stretched from themes like love or nature to horrific fantasy, but also included religious or comical topics. During the compositional process of the songs, Wolf very carefully considered the individual character of each poem and expressed it in the music.

All of the songs in his Mörike-cycle were written in the year 1888 and were published in 1889. Hugo Wolf also called his Mörike Songs “Mörikeana”, a term he made up himself.

You can browse through the whole Mörikeana provided by the Austrian National Library here, or find more out about his other major cycles like the Spanish Songbook or the Italian Songbook. You can also take a look at the last songs Hugo Wolf ever wrote: The “Michelangelo Songs”, for bass and piano, which he composed in 1897. All of his works and a lot more about Hugo Wolf can be found through the Europeana Collections as well.